http://www.wftv.com/weather/eye-on-the-tropics/hurricane-irma-lowes-customer-gives-last-generator-to-fellow-shopper/604716502 by: Jason Kelly, WFTV ABC Channel 9 Orlando >>>ORLANDO, Fla. – Natural disasters often cause death and destruction, but the looming threat of Hurricane Irma has brought out the best in some Central Florida residents. Customers have gone store-to-store searching for plywood, drinking water, gas cans and generators, many […]

By BEN DANDRIDGE-LEMCO, thefader.com Towards the end of the 2017 MTV VMAs last Sunday, Logic took the stage with Khalid and Alessia Cara to perform “1-800-273-8255,” his track about his own struggles with severe depression and suicide prevention. The rapper was also joined by suicide attempt survivors, who wore t-shirts with the National Suicide Prevention Lifeline’s phone […]

10 Hurricane Harvey Stories That Will Give You Hope For America

View Original Story: http://www.zerohedge.com/news/2017-08-30/10-hurricane-harvey-stories-will-give-you-hope-america by Tyler Durden, zerohedge.com Authored by Daisy Luther via The Organic Prepper blog, While it’s true there are a lot of stories about division and heartlessness, there are many stories coming out of storm-torn Texas that will give you hope for humanity again. Kindness and love […]

by Scott Stump, TODAY https://www.today.com/parents/10-year-old-boy-delivers-his-baby-brother-saves-his-t115283 Once his little brother, Daxx, is old enough to understand, Jayden Fontenot, 10, will have an amazing story to tell him about saving his life on the day he was born. Fontenot not only helped his mother, Ashly Moreau, deliver his baby brother […] 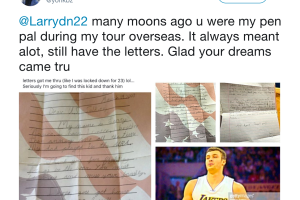 from NBA.com http://www.nba.com/lakers/news/170724-larry-nance-jr-pen-pal When serving in the United States military in 2003, Bianca Snow couldn’t have predicted that her 10-year-old pen pal would grow up to become a Los Angeles Laker. Then again, with the way little Larry Nance Jr. wrote about his NBA-player father and his fandom […] 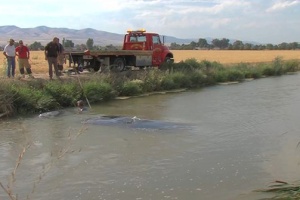 sunnyskyz.com: July 21, 2017 http://www.sunnyskyz.com/good-news/2311/Good-Samaritans-Jump-In-Canal-To-Rescue-Elderly-Man-Trapped-In-Truck#GkOgvxfSSQ5aZW8c.99 Norman LaBarge, 79, of Tremonton, Utah, is grateful for the three good Samaritans that came to his aid Wednesday after he drove his truck into a canal on state Route 30. LaBarge is diabetic and said his blood sugar had gotten a little low, […] 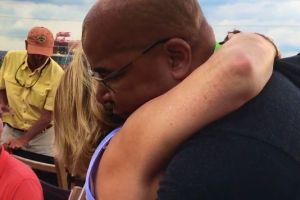 by Sheeka Sanahori, USA Today: July 21, 2017   FOLLOW LINK FOR VIDEO: https://www.usatoday.com/story/news/humankind/2017/07/19/traveler-determined-spread-positivity-across-america/489522001/  JACKSON, Miss. — His sign says, “Hi my name is Big Dave.” He scours coffee shops, beaches, and anywhere else there will likely be a crowd. He’s looking for three things: A hug, a high five, […]

‘I missed my nap for this’: 101-year-old sprinter breaks 100-meter dash record

By Marissa Payne, Washington Post: July 15, 2017 https://www.washingtonpost.com/news/early-lead/wp/2017/07/15/i-missed-my-nap-for-this-101-year-old-sprinter-breaks-100-meter-dash-record/?utm_term=.d26dbd8b7a57   Watch your back, Usain Bolt — there’s a new 100-meter dash superstar and she looks unstoppable. Meet 101-year-old Julia “Hurricane” Hawkins, who on Saturday became the oldest female athlete to ever compete in the USA Track and Field Outdoors Masters […] 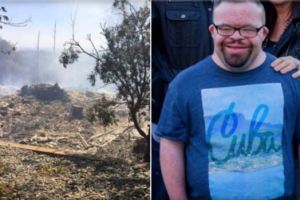 Strangers step up after man with Down syndrome loses home, movie collection

By JENNIFER EARL, CBS NEWS: July 12, 2017 http://www.cbsnews.com/news/strangers-step-up-after-man-with-down-syndrome-loses-home-movie-collection/ As a raging wildfire closed in on their Oroville, California, home on Saturday, Steve and Vicki Orsillo knew they only had about 20 minutes to evacuate. They quickly gathered their valuables — photographs, important documents and a small suitcase full of clothes. But Mark […]

http://www.huffingtonpost.com/kaia-roman/things-arent-as-bad-as-th_b_11085220.html A WONDERFUL piece from Kaia Roman from the Huffington Post about rising above the bad news in today’s world! This is what Some Positive Space is all about. By Kaia Roman, Huffington Post Bad news abounds these days. Violence. Hate. War. Terrorism. Environmental destruction. Political insanity. It […]